People often ask me about what it is like to judge beer.  It is part drinking beer, it is part appreciating beer, and it is also partly beer analysis, all at the same time.  I have crisscrossed the globe to judge at the largest beer contests in the world, but this week I judged at two of the smallest without ever leaving North Georgia.

The first was a simulated contest at New Realm Brewing that enabled a small group of beer judges to either become Certified Beer Judges or to raise their ranking within the Beer Judge Certification program.  I was acting as a proctor, which essentially means I was a control subject who provided feedback on the simulated contest beers to the experienced volunteer judges who will be grading the exams.  I had no idea what the beers were, only that they were 6 different styles listed by the BJCP in their style guidelines.  Proctors are chosen among high-ranking BJCP judges, and as the organization’s Vice President, I fit the bill.  The person administering the exam was a good friend, Mike Castagno, the head brewer at Twain’s Billiards and Brews in Decatur.  We have brewed and judged together on many occasions.  If you are interested in becoming a BJCP recognized judge, the information is available at http://www.bjcp.org. 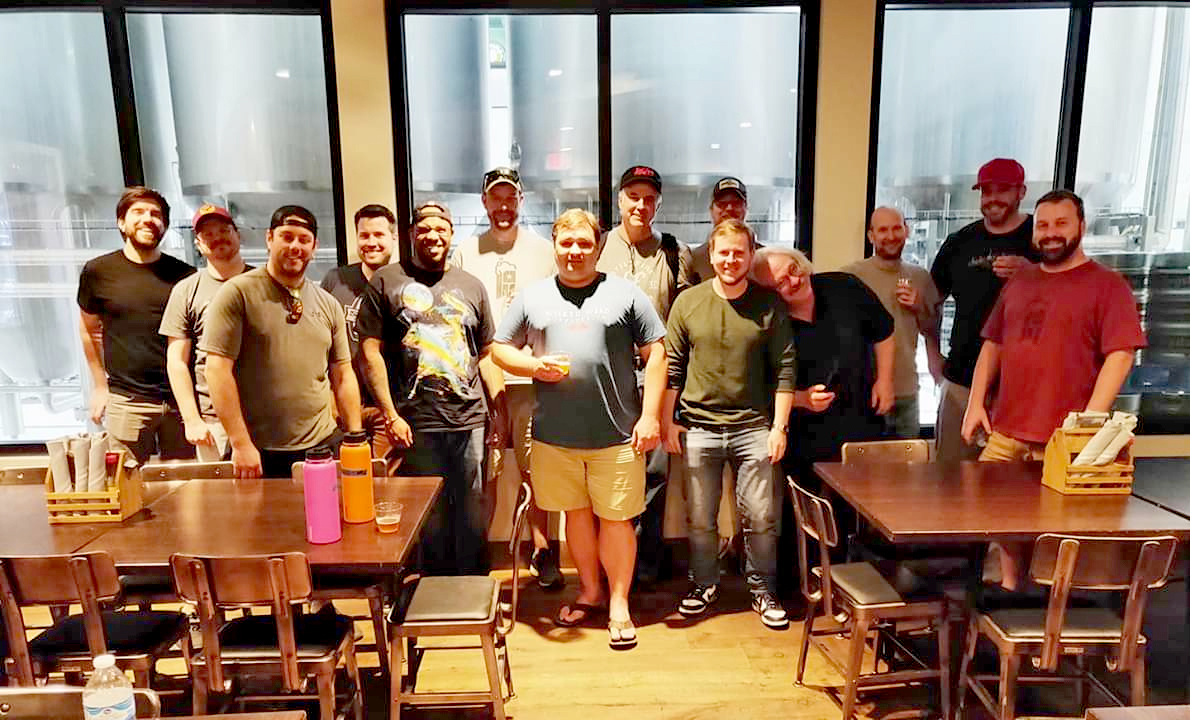 The small contest I judged two days later was at Left Nut Brewing, requiring me to cross the Great Lanier Ocean to Gainesville.  Actually, I simply drove 15 minutes.  Rick Foote, a friend of 25 years and the founder of Left Nut, decided to hold a contest for our homebrew club, the Chicken City Ale Raisers.  There were 13 entries and the winner would get to brew their beer at Left Nut.  Four of us initially picked the best three beers at each of our tables, then we sat down together to rank those 6 beers as a separate flight to determine the winner.  Owen Ogletree, a beer writer, judge, and founder of both the Classic City Brewfest and the Atlanta Cask Ale Tasting was the other person from out of town.  Jason and Jacob who do the everyday brewing at Left Nut were the other two judges.  Rick decided the contest would be a good way to involve our homebrewing friends who might want to take the next large step.

There are two areas that always interest people when it comes to beer judging: the procedure and the beer styles.  For the procedure, it is very similar from contest to contest.  The Brewer’s Association (BA) and BJCP both write style guidelines and their contests have several common procedures.  The judging is always done in the blind, so the judges never know who brewed the beer and where it came from.  To avoid any conflict of interest, judges will never judge in a category that they either brewed a beer, or beer was entered by a brewery they have a relationship with.  The contests have staff that delivers the beer in unmarked packages or poured into cups with random numbers to identify the entry.  The judges evaluate the appearance, aroma, flavor, and mouthfeel of the entry.  This requires a judge to drink a small amount of beer for each entry or else it is impossible to assess the finish and aftertaste of their sample.  We cleanse our palates with water and crackers in between entries.  The first round of a contest involves the judges writing feedback for the entrants, and depending on the contest, a score is assessed.  If there are multiple rounds, the best beers at a table or “flight” are passed on to a second round.  Second and subsequent rounds are usually a head to head comparison of the beer entries on the table by the panel of judges.  When it is time for awarding places, medals, trophies, or ribbons, the judges decide by consensus the placement of the entries.  Most of the awards are based on the style the beer is entered as.  The brewer is always the person who looks at the beer categories and style descriptions before choosing what categories they enter their beers in.  The contest organizer and especially the judges NEVER recategorize entries as something the brewer never intended.  For a BA contest like the Great American Beer Festival (GABF) or World Beer Cup (WBC), at least 3 judges determine the beers that go forward in the early rounds.  For the final round where medals are awarded, there are at least 6 and as many as 8 judges at the GABF and WBC.  Homebrew contests usually have 2 judges for early rounds, 2-4 judges to determine medals or ribbons, and 3 to 7 for a Best of Show (BOS) round.  Homebrew contests have a BOS competition because there are fewer categories and often fewer entries than the GABF and WBC.  The National Homebrew Contest (NHC) is the exception.  It will garner over 9000 entries making it the largest beer competition in the world, yet there are only 32 beer categories, so there is a BOS beer named.

Beer Styles are an artificial construct which allows us to have formal beer contests.  Styles are not arbitrary.  They are based on history and updated as necessary when the real world intervenes.  The so-called Classic Beer Styles are ones that have a long history.  They were originally brewed in regions that had a common water source, similar equipment, and the same limited ingredients.  There’s a little chicken and egg relationship with many classic beer styles.  Brewers brewed something the locals liked, and they were rewarded by staying in business.  If the demand increased, soon all the brewers would copy the popular beer.  Many beer types that might have eventually attained classic stature died either because the brewery closed, the ingredients changed, or the local preference moved on.  It took until later in the 20th Century for beer pioneers such as Fred Eckhart and Michel Jackson to investigate why certain beer types were brewed in certain regions and to try and make sense out of the chaos by dividing them into Beer Styles.  For beer lovers, styles enable the brewer to communicate to their customers what they may expect when they drink their beer.  Today, for example, it takes a lot more information to describe a beer than simply saying it is an IPA.  Going back to contests for a moment, a broad category of beer such as IPA will be further divided into categories by strength, color, and even hop profile.  “Back in the old days”, there was simply IPA.  Then it was divided into American and English IPA.  Later Double or Imperial IPA was added, followed eventually by Red, Brown, Belgian and Black IPA.  The latest recognized addition to the IPA family is the New England, or “Hazy” IPA.  Because the style is evolving as the publics’ desire change, it is impossible to say with certainty where the boundaries will eventually be drawn.  For now, they are generally a hazy yellow color with a white head.  They feature tropical hops that often give the impression of fruit juice.  The beer has a creamy texture, often aided by body enhancers such as oats, barley, and lactose.  The bitterness is intentionally low by IPA standards.  These attributes may evolve with time.

Before I go, I wanted to speak about Style Guidelines.  As mentioned before, the BA and BJCP both write Style Guidelines.  The BA writes them specifically for every GABF and WBC.  They reflect the trends of the beer industry, account for the beer commercially brewed, and try to divide up popular categories to make the contest run smoothly.  The BJCP publishes a more conservative and backward-looking Style Guideline.  Styles that have proven to be viable and not fads will be written into the guide.  There are minor updates every few years and major revisions every 5 years or so.  The BJCP Guidelines are used for most homebrew contests as well as many small commercial contests and State Fairs.  This relieves the contest organizer of the responsibility of writing up their own style guides for their contests.  The Brewers enter their beers into the style category they think it will do the best in.  A guideline is a contract for the judges, promising that these are the standards they will use to judge the beers they sample in the contest.  Before you think the BA and BJCP are trying to push the brewers to brew certain types of beers, let me add a little more information.  Each contest allows for experimental, hybrid, and historical styles to be entered.   The only limit is the creativity of the brewers.  While there are some beer styles that are narrowly defined, there are many that have enough latitude to allow brewers to make their mark and create something truly unique.  The only similarity to beer judging and dog shows is that there are two large organizations, the British and American Kennel Clubs, that write breed standards for their contests.  While dog breeds have slowly evolved over the years, the standards are strictly written, have very tight tolerances, and are striving for a single perfect dog in each category.  At beer contests, the judges (and brewers) have the latitude to use creativity in many categories, and many different beers may be in the same style and “to style”.  There are no “beer handlers” like they have at a dog show.  By extension, the judges have no history or knowledge of the beer entries like the dog judges have.  The most award-winning beer in the history of the world is judged the same way as all the other beers in that category, with no prejudice on the part of the judges.  The beer judges always strive to pass the best beers in front of them to the next round, or rank them in order of how well they represent the style they are entered in.  It is both fair and as honest of a system as can be implemented.